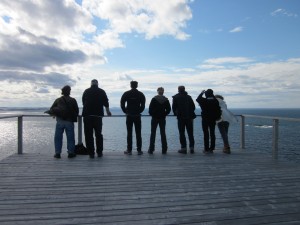 February 5, 2012 In Uncategorized By Gisele

I was back in Montreal.  Newfoundland was already something of the past. The closer I made it to the west coast, the more I was closing in on my deadline. It was time to launch.

There were no hard set rules for when the sabbatical should end. Because it had started a year ago, and because I was of the opinion that a sabbatical stretching beyond that sounds more like retirement or unemployment line to me, it was then time for it to end.

So, as the calendar went, the year was coming to an end. Time to launch my website, and be visible, at long last.

When I had first started working on my website a few months ago, I had been excited and restless to go live. But at that point, a few months later, the magic was gone.  The conflict I had with the designer, the difficulties that followed in trying to complete the site and the frustrations associated with it all made it that way.  You simply cannot have Christmas in February and expect it to be the same.

The other thing that was different was that I had come to understand that although going live might have meant the world to me, 99% of the world population would not even know I had launched it , never mind knowing that I might have launched it late. So I guess you can say,  I had learned to think of it in relative terms.

However, regardless of whether it was perfect or not, or merely good enough, it was an incredible sense of accomplishment and relief to know that it was done.

Well now that I was visible, I also had to be active. To be out there. Well, think back to when you were 6 years old and bed time was drawing near.  You’d do anything to be ignored and to escape the deadline.

In the adult world we usually call this procrastinating; thinking of everything else I could do before I do whatever it is I know I should be doing.

Fear, doubts, wanting to avoid failure at all costs, including the cost of losing out on a great venture by not going forward with this are some of the factors behind the syndrome of not being quite ready yet, I suspected.

The well of procrastination is indeed an endless one.

I think I was scared.  What if it did not work? what if I joined the 80% of entrepreneurs who are known to fail in the first year of operation? what if, what if, squeak, squeak, squeak….I could hear it already!

My hamster and I were no longer on speaking terms. To day 116.