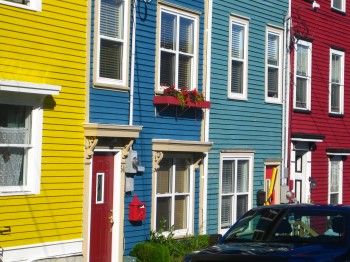 February 2, 2012 In Uncategorized By Gisele

When you get to Newfoundland, more particularly to St-John’s, you actually drive to the end of the road.  Not the local road, or the road to your backyard but the national road that travels from coast to coast.  In St-John’s you can actually stand where it starts!

What Newfoundland and Tofino have in common is the ruggedness of the scenery, the integrity of their people and the beauty of their coasts.  Tofino is of Native’s ancestry and culture whereas Newfoundland is of European Nordic culture. Different.  Although they will argue to no end that their respective salmon is better than the other one (Atlantic and Pacific salmon) they have both caught on to the delights of fresh lobster and oysters and honestly, we don’t really care who has the best salmon. They are both exquisite!

We were going nowhere that day.  Intentionally. We were practicing Tem’s biggest  dream:  to get behind the wheel of a car and drive into the sunset to wherever the heck we feel like going and do so for months on end.

So that was a 24 hour version of that dream.

We drove until we came to the end of a road.  Literally.  We parked the car and started on a trail that led us to one of the most spectacular place I have had the privilege to see, and I have seen a few.

Where we stood was an old tiny cemetery nestled in the hill. The grass covering the road leading to it was a testimony of a road less traveled. Ahead and all around us was the Ocean.  The restless Atlantic Ocean which was uncharacteristically calm that day.  At our feet were rocks, conveniently piled up so that we could sit comfortably.  A light, soft wind carried aroma of sea salt and wild herbs and was the only sound around us with the exception of a few seagulls.  Even they were quiet. We were looking for puffins but could not see any.   There were no waves other than those left by the whales movement in and out of the water.

We had no idea where we were and I could not tell you what the name of the place was and to make it even more surreal, all the pictures I took of that place have been destroyed due to my high tech agility in transferring them from the camera to the computer.  I unknowingly erased them all.

So to this day, this place remains a secret place, almost as surreal as a dream you wake up from.  It was however a moment in our lives, a place where peace, rest, love and hope for the future all appeared to be possible.

And we moved on because the day needed to yield to the morrow.

We felt no hurry.  I especially did not.  I wanted this vacation to last. We knew that when it would end, so too would my sabbatical…. To day 115.